Miharu Yoshitome (吉留 未春, Yoshitome Miharu), nicknamed Miharun by Kana Ikeda, is a second year at Kazekoshi Girls' High School who has a bit of a rivalry with Kaori Senoo (who is unaware) thanks to their encounter in the tournament and in the bath.

Miharu has short grey hair and blueish-grey eyes with glasses.

She wears a standard Kazekoshi uniform.

Miharu is a serious, but funloving girl who is close to Kana Ikeda and she seems to be the most worried for her, especially during the individuals.

Miharu appears with the rest of Kazekoshi Girls' High School watching their abusive coaches tirade and afterward announcing to Mihoko Fukuji the schools that advanced to the finals. After Mihoko's win in the first round of the finals, Miharu hands her the play records from the previous day ,thanks to a few non-regular members, prompting Mihoko to cry.

During her match in the finals, Miharu was shown to do pretty well winning the first few hands off of the beginner Kaori Senoo, even correcting her on a riichi. However her luck didn't last as a few turns later Kaori landed a yakuman and wins the point battle. Miharu is shown after her match in Kazekoshi's waiting room happy because her beloved captain praised her performance and protecting the lead.

Miharu next appears during the final match rooting and making brief commentary about Kana. After Kana's defeat she is there along with the rest of Kazekoshi and bore witness to their coaches act of kindness.

Before the tournament Miharu is seen with the other Kazekoshi Girls' High School regulars gathering and expressing their desire for Mihoko Fukuji to win the individuals so she can go to the nationals. We first see Miharu and Kazekoshi at lunch break during the first day of the tournament. After Mihoko states everyone progress, she along with the others tell the captain not to worry about them but for herself. At the end of the first day, Miharu is near the top of the leader board and advances to the next round. During the second day of the tournament we see Miharu in the last match of the day contending for a spot in the nationals against Kazue Nanpo, Saki Miyanaga and Satomi Kanbara. Miharu starts off great winning the first few hands (though more worried about Kana than herself). However she is hit during the South wind by both Nanpo and Saki and is finally defeated when Saki hits a tsumo after a kan. Miharu ended up not earning a top three finish and did not get a spot in the nationals.

After the tournament Kana is looking for the captain to ask about the combined training camp they've been invited to. Miharu informs her that she already left and hasn't decided about the camp. Later Miharu and the rest of the team convince Mihoko that they want to go to the camp to get better and she agrees. 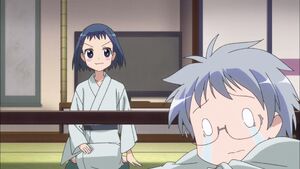 Miharu is seen at the start of the camp conversing with Jun Inoue and later at the bath with her opponents from the prefecturals. During the bath they all state their desire to have revenge on Kaori Senoo and she is made fun of for being a flat-chest. When Kaori walks in with revealing her huge bust, it furthers her rivalry with the girl. After the bath she gets a chance for revenge with the others but is defeated by the same yakuman and is so depressed she doesn't want Kana to talk to her. The next day Miharu has a match with Seika Bundou, Satomi Kanbara and Ryuumonbuchi High School's Tomoki Sawamura with the results unknown. During the lunch break, while Hisa Takei is flattering Mihoko Fukuji, Miharu decides to tell her that their captain isn't for sale.

Miharu, along with Kana Ikeda, are chosen to be attendants to Mihoko Fukuji as she enters the individual tournament at the nationals. After it is revealed they will be sharing a room with Kiyosumi High School, Miharu is present and says that Tsuruga Academy will be in Tokyo shortly. During Kiyosumi's free time, Miharu is seen hanging out with Kana and Koromo Amae.

Miharu accompanies Mihoko Fukuji to help the Achiga mahjong team get stronger before their semi-finals match.

Miharu and Kazekoshi Girls' High School are present to send off Kiyosumi High School before the start of the semi-finals match. She is later shown watching Hisa's match with Mihoko and Kana Ikeda.

When Hisa Takei asks who won their practice match, Miharu interrupts Kana to say that they were overpowered.

Not shown in anime or manga; but in the PSP game Saki Portable, Miharu has a similar ability to Mako Someya where her ability tells her which tiles are dangerous and more likely to be ronned on; this allows her to be good at defending points, as she will only lose points via tsumo.

Retrieved from "https://saki.fandom.com/wiki/Miharu_Yoshitome?oldid=19130"
Community content is available under CC-BY-SA unless otherwise noted.