Momoko Touyoko (東横 桃子, Tōyoko Momoko), also known as "Stealth Momo", is a first year student at Tsuruga Academy who lacks presence and she is often ignored by her friends despite her efforts to gain attention.

Momoko is a young first year student who, like Mihoko Fukuji and Nodoka Haramura, has a busty physique. She sports dark and glossy shoulder-length hair with two strands trailing down her temples and intersecting her eyes. She is normally seen garbed in standard Tsuruga Academy student uniform. Due to her lack of presence, she is frequently depicted as either completely invisible, semi-transparent, or with parts of herself dissipating into a smoke-like array.

Momoko is not a very social person; she stated that even in class, it was as if her classmates never realized if she was or wasn't there. It wasn't until the day she met Yumi Kajiki, that she began becoming more social to people around her, especially to her teammates. She has a strong affection for Yumi and becomes quite jealous when Yumi shows interest in other people. She has an accent in which she often adds the ending "su" and "s" to her sentences. Momoko usually refers to others with self-invented names rather than their actual designations. This can probably be attributed to Momoko having cut off communication to others when she was younger; her speech never maturing.

We see brief glimpses of Momoko throughout the tournament's final round, but are not shown her face until halfway through her vice-captain's battle. In the last hand of the first hanchan game, she wins off of Touka Ryuumonbuchi. During the intermission of her battle, she shows up when Yumi calls her and says that even though it took her a while she is now completely in "stealth" mode. Afterwards we get a backstory of how Yumi became interested in Momo through online mahjong but couldn't find her. When Yumi got her general location, she stormed into the first year room and yelled that she wanted Momo, which caught the girl's attention. Throughout the rest of the battle, Momo is then shown winning off of Touka repeatedly until Nodoka wins off of her, leaving Momo in disbelief that someone could see her. After the battle, Momo catches Yumi before her the captain's battle and expresses her disappointment. Yumi however, comforts her by saying that she actually won and that she's the best.

During Yumi's battle, Momo makes brief comments and has faith in Yumi until the very end when she is defeated. In the halls, Momo greets Yumi after her loss and they have a conversation, expressing Yumi's disappointment but Momo cheers her up.

Before the tournament we see Momoko on the roof of Tsuruga with Yumi holding hands and discussing their bleak chances in the individuals.

On the first day of the tournament Momo is with everyone else at halftime listening to Mutsuki Tsuyama tell of her defeat. At the end of the day Momoko is shown to have been good enough to get into the top 20 and advance to the next round. On the last day we see Momoko's 9th match against Ryuumonbuchi's Tomoki Sawamura and Kiyosumi's Hisa Takei and Saki Miyanaga. It is revealed that even though Yumi was fine despite losing to Saki during the team tournament, Momoko saw how disappointed her senpai was after her defeat. Momoko was then determined to avenge Yumi's earlier loss against Miss "Tsumo After A Kan" (Saki). During the match Hisa set up a plan to seal Saki's kans. Both Tomoki and Momoko quickly caught on and they silently collaborate, which successfully prevents Saki from implementing her usual strategy. Momo then used her stealth mode to start winning points from the other players, beginning with Tomoki. But Momoko ended up losing to Saki when Saki used her digital skills that she learned at Kiyosumi's training camp to glimpse through Momoko's veil. It was later revealed that Momo did not advance to the nationals.

After the tournament, while Satomi and Yumi are discussing Kiyosumi's invitation, Momoko is present to watch over Yumi's swim training. After they get out, Momoko says that Yumi should now be able to swim in the ocean. Later, Momoko is again present with the rest of Tsuruga helping cheer on the new club president. 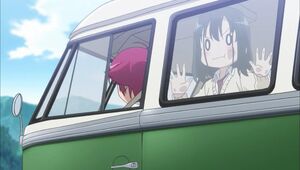 While driving to the training camp in Satomi's Volkswagen van, we see Momoko in the backseat pouncing on Yumi. At the training camp we first see Momo joining Yumi for a walk around the camp. They talk about how the training camp may look cruel to her and Satomi Kanbara, but states that it is very useful for the team and that she wants to spend more time with her. During the conversation, Satomi shows up and tells Momoko not to worry and to have fun before heading to the baths.

Later when Hisa Takei showed up to recruit Yumi for a match, Momoko was shocked that they called each other by their first names and that they said they got along last night (Momo might have misunderstood). When it was time to leave the camp, Momoko was again jealous that Hisa chose to speak with Yumi.

Momoko and the rest of the Tsuruga team are shown sitting around listening to the broadcast of the tournament and its set up before they go to Tokyo to support Kiyosumi. Momoko says that Kouko Fukuyo isn't very good at her job. When Tsuruga gets to Tokyo, Momoko is present along with the others to greet Kiyosumi before their first match.

Momoko appears after Achiga has just advanced to the final eight where she accidentally bumps into Kuro Matsumi. After she apologizes, they recognize her as the person Touka Ryuumonbuchi says can disappear. Momoko and Satomi Kanbara then bring Achiga along to Satomi's place, where Momoko jumps into the arms of Yumi Kajiki. After Yumi agrees to help Achiga, Momoko and the others play against them.

She is seen viewing the side-B semi-finals along with Yumi and Kaori Senoo. After an impressive win by Hisa Takei, she asks Yumi if it was a coincidence. They then make analogies on the way she plays.

While Momoko is a fairly decent player, her increased mahjong playing ability primarily comes when she augments her negative presence into an advantageous stealth state, causing her opponents to miss her moves. This doesn't work, though, on others who ignore presence such as Nodoka Haramura. Others play into her hands and when she potentially plays into theirs, they overlook their chances. When she sits down at the mahjong table, stronger players are more aware of her presence and it takes time for her to disappear. For this reason, she is more successful in the longer two hanchan games of team battles than when she is in the shorter east wind and one hanchan games of the individuals.

Community content is available under CC-BY-SA unless otherwise noted.
Advertisement