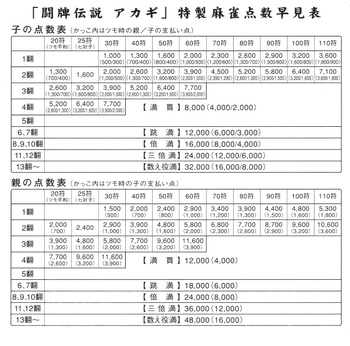 The han values of the one or more yaku(s) and any doras are added together to get the total han value of a winning hand. While each dora is worth one han, a tile can have in the extreme case as many as five doras, if four dora indicator tiles point to it and it's a red-five. If the total han value is less than 5, then the fu value also needs to be calculated.

Any winning hand having 120+ fu will also have 4+ han, making it worth at least a mangan.

The points payments in the second table are simply multiples of the 2000 limit.

Players who discard visibly dangerous tiles that can hurt other players have to pay extra in the case that those tiles lead to a win.

In the event where more than one player waits for the same winning tile(s), then some rules would allow both players to take points from the player who discarded the winning tile.

To be specific, the honba count increases by one for each of the following conditions:

After games in individual tournament play, points are recalculated to produce ± scores. These are points adjustments to reward the top player(s), at the expense of the lower ranked players. There are two main types, oka and uma. For both of these, rounding rules vary, so slight differences in the ± score can occur.

Oka is like an ante. It's as if each player starts a game with 30,000 points and pays 5000 points into the pot, with the game winner collecting the pot. This system is based on this premise. However, that procedure is not actually done. Instead, the 2nd, 3rd, and 4th place players divide their points by 1000, round it with 0.5 rounded down, and then subtract 30 to get their ± score. The total ± score of these players is negated to arrive at the winner's ± score. Still, the game winner nets about 15,000 points from an oka, while the others lose about 5000 points each. So far, only oka has been used in the Saki universe.

Uma is a spread bonus, widening the gaps between the haves and the have nots, based on the four finishing positions. Points adjustments vary according to those who administer a game session or tournament. A typical setting will have the +/- adjusted by:

Naturally, these +/- adjustments may be changed at discretion prior to a game and/or tournament.

In the event where players have the same number of points at the end of a game, the tie-breaker falls on order by the initial wind position at the very start of the game. Raw points are not adjusted. Instead, placement at the end of the game is affected. So, the difference will show upon application of the Oka and Uma bonuses.

For players in yakitori, their scores are deducted. Typically, that value is an additional -20 or so. Of course, this is for those game sessions where yakitori is implemented. Because of this harsh penalty, players who have yet to win a hand are hard pressed to do so, regardless of hand value.

Retrieved from "https://saki.fandom.com/wiki/Scoring_in_mahjong?oldid=12948"
Community content is available under CC-BY-SA unless otherwise noted.